Louise Odier is a Bourbon rose bred in 1851, and joins Zephirine Drouhin as my second old-garden rose.  It is a very vigorous bush that has shot up to more than three feet so far in this, its first season.  The blossoms are clustered, and have a very strong old-rose fragrance.  Here's a shot of the entire shrub in the spring of 1998, it's first season.

It's now 1999, and Louise Odier is covered with buds about to burst forth -- it clearly wants to take first place this year

Although Golden Showers took honors as the first to bloom in 1999, Louise Odier followed a couple of days later, once again overwhelming the senses with color, form, and scent.

Judging by the number and size of the buds, Louise Odier is about to put on an unbelievable show -- May, 2000.

There really aren't enough superlatives for me to use about this rose!

It's the second week of June, and Louise Odier is still into it's incredible first flush!

It's July the Fourth, and Louise Odier is putting on another show.  This is one rose that seldom disappoints!

It's now May, 2001, and the first of the hundreds of buds on Louise Odier have opened, revealing the wonderful blossoms with overpowering damask fragrance.

Louise Odier is getting ready to put on a spectacular show -- May, 2002.

When this lady puts on a show, no one can go past without stopping to watch!

On the last day of May, 2003, Louise Odier has begun to open the first of quite literally hundreds of buds.

Louise Odier has provided a few blooms in a second flush at the end of July.

It's the thirteenth of May, 2004; Louise Odier has provided us with the very first rose of the season.  After the disasterous winter, its color and exquisite fragrance are more than welcome!

A few days later and more buds are opening; there are hundreds to go! 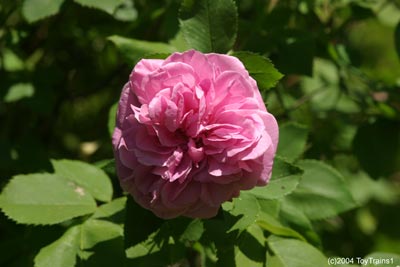 It's now early August; the summer has been cool and very wet and the roses haven't appreciated it.  Some, however, are once again in bloom.

May 19, 2005 brought us the first rose of the year, from Louise Odier, and it's a beauty in both form and fragrance.

It's Memorial Day and Louise Odier is really starting into its spring flush.

It's now July 1st.  The first flush is past but Louise Odier will continue to put forth blooms all through the summer.

It's now 12 May 2006 and Louise Odier has opened the first of hundreds of large fat buds that promise quite the spectacle.

As you can see in this photo, with the hundreds of blooms already on the bush, the first flush is nowhere near over!

It's mid-June; Louise Odier has been in continuous bloom for one solid month and is finally starting to taper down.  Today I gave her a good pruning and deadheading, but she's still producing blossoms like this.

It's July 1st and Louise Odier has opened a beautiful blossom to welcome the new month.

Fourth of July and we have a few more sweet smelling blossoms.

We're getting toward late August and Louise Odier surprised me this fine Sunday morning with a couple of very fragrant, gorgeous blossoms.

The last flowers were in August; it's now late November and while Louise Odier has no flowers for us, she does have other things of visual interest!

The fourth week of April 2007 brings us the first rosebud of the year.  Once again, it's Louise Odier to take that honor.

Fast forward to the third week of May and the buds are beginning to open.

15 May and the bud has opened, giving us our first rose of the year!

One day later and we have many more buds opening.  It's a shame you can't experience the wonderful fragrance!

May 20th brings more blooms as the hundreds of buds begin to open in earnest.

Remember all those buds I mentioned?

Having rested, Louise Odier is once again opening buds in early July.

It's mid July and Louise Odier appears to be in a mini-flush.

It's now September and even Louise Odier had to get into the act by opening a few exquisite blossoms.

It's mid-April 2008 and Louise Odier has tied with Zephirine Drouhin for the honor of the first rosebud of the year.

The buds have been extraordinary!

Louise Odier takes the honor of producing the first rose of the year, 13 May 2008.  This was shot with my new Canon 100 mm f/2.8 macro lens, which should help me take better rose photos from hereon out.

It's now 24 May and the buds are beginning to open in earnest.  The fragrance near the bush (which now towers over 8 feet tall with long, arching, graceful canes) is becoming overwhelming -- and that's with most of the buds yet to open!

This is the view of Louise Odier that passersby get from the street.

Looking at the show that Louise Odier has put on this year, with literally hundreds of roses all of which are intensely fragrant, I can understand why this rose has been in continuous cultivation since 1851!

It's now mid-June, the spring flush has faded, I've cut back Louise Odier so that her neighbors can have the light they need to thrive, and still she puts out buds and new blooms.

The second to bloom in May 2009, Louise Odier is already putting on an incredible display!

It's now mid-July and after resting from the massive spring flush, Louise Odier will now produce small intensely fragrant blooms like these throughout the rest of the summer and well into the fall.

It's the second of May 2010 and although she had a thirty foot tall spruce tree fall on her this past winter (you can see that on the side yard garden page), Louise Odier has made a remarkable recovery and has begun to open the first of her many buds.

As expected, one day later and the bud has completely opened revealing a gorgeous flower with an intoxicating fragrance.

We're into the second week of May and Louise Odier has started to put on her spectacular annual show.

It's now late June/early July and Louise Odier continues to bloom, one of the most reliable of all of my roses.

In 2011 there was no contest as to who would have the first rose bud.  I found this on Louise Odier on the 20th of April.

On the 6th of May, it has begun to open, the first rose of the year.

A week later and Louise Odier has opened up her first blossom.  This is the second rose of the year, Gertrude Jekyll having opened a blossom a few days previously.

By mid-May, Louise Odier is into her main spring flush. 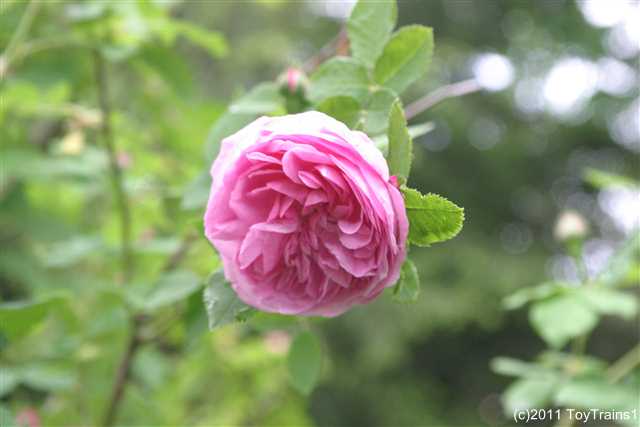 It's now the beginning of summer and while the spring flush is over, Louise Odier continues to open the occasional blossom.

The end of June brings this beauty.

As she has in so many years past, Louise Odier took the honor of forming the first rose bud of the year, 20 March 2012, a full month earlier than normal and, no doubt, the result of having essentially no winter this year.

She continues to form more and more buds, promising quite a show, but as of 20 April, still no blooms.

All of the text contained within this page and all of the photographs and videos taken by ToyTrains1 are copyright (c) 2000 - 2020 by ToyTrains1, and may not be reproduced, in whole or in part, without the written consent of ToyTrains1.

If you wish to use any of my content, please see my detailed copyright statement for terms and conditions of use.